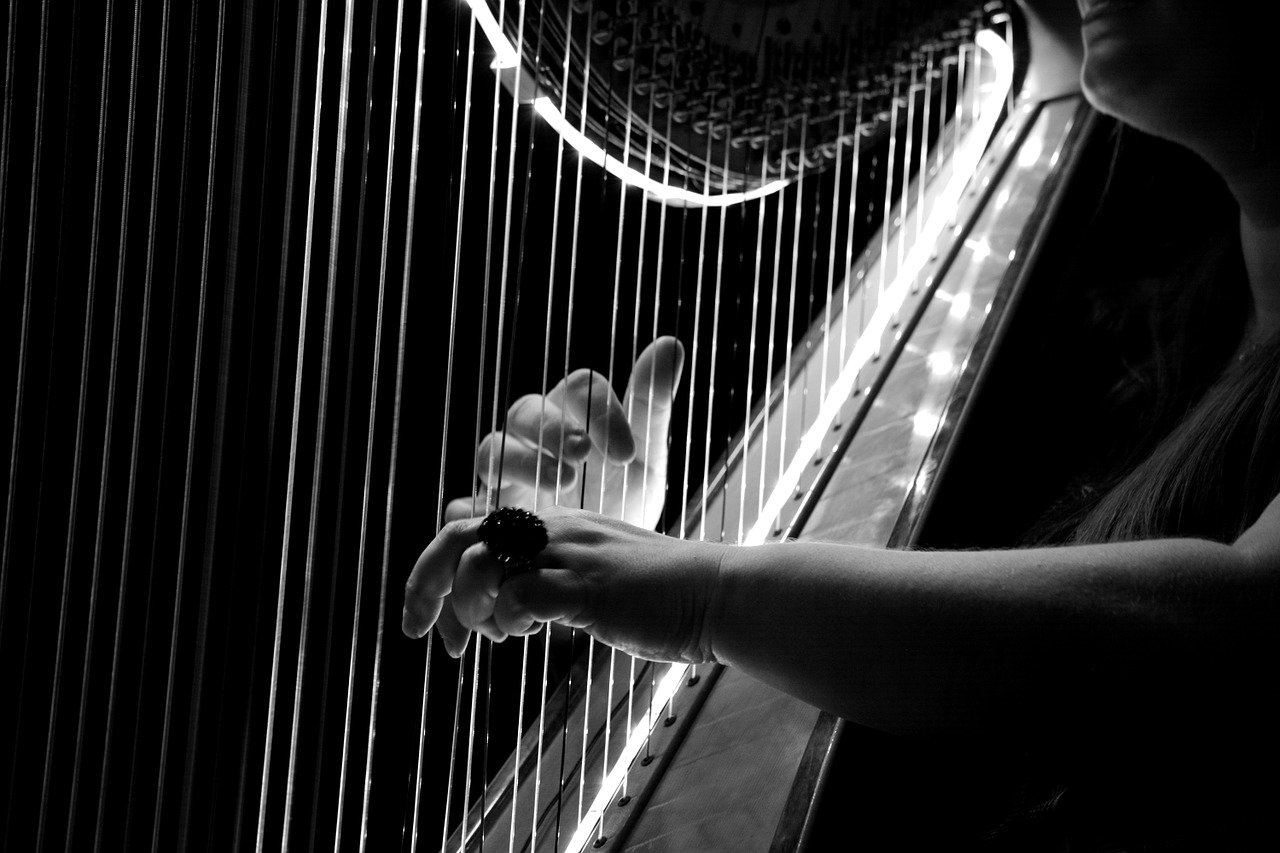 Legends say the world’s first harp was made from the shell of a tortoise after Apollo’s feet accidentally brushed against it on the ground.

That slight touch of his skin caused the shell to vibrate and formed the lyre, the precursor of the modern harp. The tales surrounding harps are endless, and so is their long path of evolution after traveling so far and so long…

It’s interesting to note that the history of music is entwined with the history of human migration. From the Scottish to the English, each has shaped the other’s instruments, as all the musical notes, tunes, and tales mingled across the English Channel.

It’s a pleasure to trace the origin of the modern-day harp in Scotland and to imagine the celestial sounds that each of its ancestors comes with.

So, here we will tell you all about harps and how to dip your toes into the fascinating world of this heavenly instrument. So, rhyme along!

Studying the two most common types of harps

From intricate wood designs of 2,000 pieces to a simple single piece of wood, the history of harps is as vast as the myths surrounding it. However, the basic types of harps can be boiled down to a pedal harp and a lever harp.

As the name suggests, a pedal harp comes with pedals that connect to disks in the neck of the instrument. Each pedal, located at the base of the harp, brings to the table 3 different notes: the high, the middle, and the flat notes.

With it, a harpist can bring out the widest variety of sounds shuffling all the dynamic octaves and the highs and lows on each scale. This is the harp that you get to see in choirs and churches; their magnificence merges with the celestial sounds of each plucked string to overwhelm your soul.

One advantage of this harp is you don’t need to pull any lever while playing, making both hands free to focus on the melody. No! This doesn’t mean a harp is an easier instrument to play. This arrangement just makes playing the harp a bit easier.

Well, a lever harp is a similar collection of strings that come with knobs or levers attached to them. These levers allow the harpist to play two different notes on the same string and increase their pitch from a high note to a flat one.

But to do this, you gotta turn the knobs with your hands, which makes it more difficult to play than a pedal harp. This is the reason beginners usually start with the lever harp to get the hang of it, and then slowly ‘graduate’ to the pedal harp.

Moreover, it’s challenging to play complicated melodies with lever harps, since one of your hands is always reserved to adjust the knobs. So, professionals always use pedal harps, as you get to see in the magnificent orchestras.

Most musicians haven’t ever seen an earth harp. It comes with 42 strings, and its height can go up to several stories of a building. Yeah! Let that sink in. You need to hear its notes to believe that any instrument can really make a sound like that.

Due to its sheer size, it requires two or more people to play the harp, and its playing mechanism is similar to rubbing damp fingers on the rim of a glass. Just look for them online, and you’ll be hooked!

The songs and poems of olden days often used to have harps that sang on their own. That’s because they were aeolian or wind harps. These harps can come in various sizes, one as large as the standard harp, or the other that can easily fit in your pocket.

A wind harp is a set of loosely attached strings, and it may not always have a soundboard. It’s the air blowing through the strings that play the instrument, and often they come out as howls and shrieks of wild animals.

Aeolian harps have been a long tradition in Scandinavian hymns. That’s because their characteristic echo always brings out a feeling of someone calling out to us from a distant land!

These are the ones which are getting very popular nowadays, although most people have never seen one. Like electric guitars, electric harps let you hear even the quietest of notes, and are great supporting instruments in many popular musical concerts.

They are costly but enhance the entire tone, amplitude, and bass of the piece that’s being played. Electric harps are the best choice for professionals who want to take their music to the next level.

How many strings are there?

Well, this is a common question that many people tend to ask, and there seems to be no definite answer to the problem.

A pedal harp, on the other hand, belonging to the advanced end of the spectrum, has 47 strings. It has, in its reign, a massive count of notes, pitches, and scales that can resonate with all the instruments playing in an orchestra!

If you are a first timer, deciding to put precisely how many strings on a harp can sound challenging at first. But we have some questions to help you out: Would you be traveling a lot with it? Or, how do you see yourself with the harp in your mind? Is it you playing at a concert, or is it just you near a flowing river with not a single soul around and you play to your heart’s content?

Your answers to these questions determine the size and the number of strings your harp would have. Ideally, the instrument of your choice should be the one that makes you want to sing your heart out. Mozart said that despite many shining instruments lying around, he’d still go for a rusty, old piano if that inspired love in him. And the truth isn’t far from that!

The number of strings in your harp depends on how you want it to be. But if you want a range, it’s as we’ve mentioned before: 19 to 47.

And what’s the best harp for beginners?

This is another question that keeps cropping up on all online forums and chat groups. If you’re a beginner, harp is definitely a tough instrument to start with. Keeping that in mind and the questions we asked before, a smaller harp isn’t always a good option for beginners.

Sure, it helps to cut down on your budget, but it can definitely be tough to master a small harp with fewer strings. Moreover, the number of strings also comprises the range of notes you’ll get. For instance, 22 strings mean a 3-octave range and 38 strings mean a massive 5 octaves.

We’d suggest you the flexible average of all, 34, for two reasons. First, you’ll get a 4-octave range with this arrangement which is pretty decent. And second, if you’re eyeing a harp for music exams, this is the least number of strings required for the purpose.

So, how much does a harp cost?

Different types of harps cost differently. For those just dipping their toes into the fascinating world of music, a lever harp with 34 strings could come at anywhere between USD 4,000 to 8,000. These are high-quality entry-level harps, although prices lower with a lesser number of strings.

And if you’re looking at a magnificent pedal harp, the price range is somewhere between USD 15,000 to 20,000. But even merely plucking its strings would fill your heart with sheer pleasure and it’s always worth the investment.

We want to end with a note from the late veteran actor, Robin Williams from the film August Rush. “You know what music is? God’s little reminder that there’s something else besides us in this universe, a harmonic connection between all living beings, everywhere, even the stars.”

And we believe, a harp takes you along that long, invisible bridge to happiness that connects us all. That’s why a harp soothes us, for it knows where the perfect chords lie. So, take your pick and dive!