Home Theory How Do Bagpipes Work 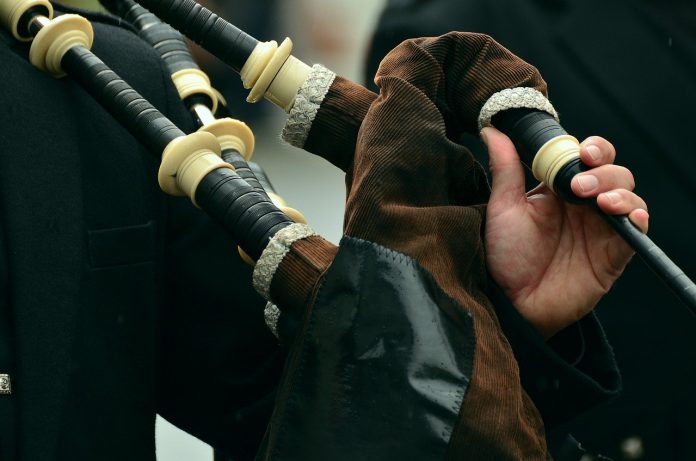 The sound of bagpipes playing is at once mysterious and melancholic. This rather hefty and clumsy instrument is one of the oldest in the world. Although usually associated with the Scottish Highlands, it has been played across the globe and in multiple cultures.

So, how do bagpipes work and what gives them their characteristic sound? In short, what is it that makes them tick?

If you want the answer to any or all of these questions, then brace yourselves. Today we are going to take a deep dive into the world of bagpipes and find out all about them.

It’s All In The Air

The bagpipe is a wind instrument, which means it needs a steady supply of air to operate. Before the bagpipe can be played, it must be prepared with an adequate supply of air. The player has to blow the air into the blow tube, from which it travels to the actual bag. Once the bag is filled, the pipes are ready to be played.

Blowing air into the pipes requires specialized practice and expertise. Most bagpipes have a non-return valve that prevents the air from escaping. But in those that don’t, the player must cover the tip of the blow tube with their tongue during inhalation. Modern bagpipes also make use of special bellows that supply a clean airflow to the pipes and assist in collecting any condensation that might have formed inside.

It is this air that is eventually pushed out through the pipes to produce the melancholic melody of this instrument. Bagpipes are constructed so that air can be pushed around the bag, causing the sound to be continuously produced.

Therefore, it is the task of the player to supply the instrument with the right amount of air needed for it to function. Without adequate wind power, the bagpipe is nothing but a, well, bag with pipes.

But don’t think that this instrument is all air and no substance. Bagpipes are one of the most complex instruments, and there are multiple parts of a bagpipe that we now need to discuss.

Parts Of A Bagpipe

Now that we know the fuel that drives the bagpipe (we’re talking about the air, of course), let’s take a tour of the other parts of a bagpipe. Although there can be many variations, a bagpipe is fundamentally composed of three parts: the bag, the chanter, and the drone. Let’s discuss each of them in detail now.

The bag is simply a sealed reservoir which stores the air for sounding the bagpipes. A pressure arm regulates the pressure inside the bag, and this allows the player to maintain an even, continuous sound.

As mentioned above, the bag must be kept inflated for the bagpipes to actually work. This is done by blowing through a blowpipe, or by pumping air into the bag using a bellows.

Traditionally, bagpipe bags were made of the skins of goats, sheep or any other locally sourced animal. In recent times, however, the use of synthetic materials for manufacturing the bags has become more prevalent.

Synthetic bags come with their advantages as well as disadvantages. They can be fitted with a zip to allow the installation of a moisture trap inside the bag. But, they can also carry the risk of developing fungal spores, which might result in lung infection.

Whatever the case may be, it goes without saying that the bag is the most important and iconic part of this instrument. Without the bag, a bagpipe is not the same, literally as well as figuratively.

And now that you know all about the bag let’s discuss the next important thing, the chanter.

The “chanter” is the melody pipe of the instrument. All bagpipes must have at least one chanter, though there are certain regions, such as the Balkans and North Africa, where bagpipes with two or more chanters may be found.

The chanter is typically located on the bottom of the bagpipe and resembles a narrow tube with holes in it. While breathing in the air through the pipes, the player presses down on the appropriate holes to control the melody.

chanters can be cylindrical or conical in shape and are designed to be open-ended, which means that the player cannot quickly stop the pipe from sounding. This results in most bagpipes giving out a characteristic legato sound without any gap in the flow of music.

Playing bagpipes is considered to be a highly technical vocation because it requires specialized movements to break up notes and create impressions of genuine accents and articulation. These movements are mostly specific to each bagpipe, and consequently transitioning from one instrument to another requires significant practice.

Novice bagpipe players are usually required to play with a practice chanter, which is essentially just a chanter pipe without the bag or drones. A practice chanter allows the player to practice the instrument without worrying about controlling the other parts.

Before we move on to the next part of the bagpipe, we’d like to mention the chanter reed. This is a small, single or double-pieced part of the instrument that is housed inside the chanter. Typically, the smaller the reed is, the louder is the sound produced by the bagpipes.

Now, let’s move on to the drone.

The last, but perhaps the most characteristic among the parts of a bagpipe is the “drone.” Typically bagpipes have only one drone, which does not need any finger-manipulation and in fact, gives out a constant note during the entire duration of play.

The drone usually has two parts that can be slid over each other to adjust its pitch. It’s typically cylindrical, and comes with a single reed, though double-reed drones are also available.

Drones are usually positioned based on the type of the bagpipe, and some even come with a tuning screw. Drones with tuning screws can be tuned to multiple pitches or even shut off altogether.

It is the reed that forms the heart of the drone. Usually in the form of a split piece of wood, the reed is responsible for tuning the device. Earlier reeds used to be made from cane, but nowadays plastic is also used for the purpose.

The reed itself is composed of a “tongue” that sits on top of the reed. The tongue vibrates against the body of the reed when air passes over it and produces the unmistakable sound we have come to associate with bagpipes.

We’ve already mentioned that most bagpipes typically have only one drone; but there are certain variants, such as the Great Highland Bagpipe, which consists of three drones. Two of these are tenor drones, while the third is known as the bass drone. Combined, they produce a tune that is chilling, yet enchanting!

So, now you know all about the parts of a bagpipe and how they operate. Then, let’s spend some time listening to (or in our case, reading about) some best bagpipe songs.

Bagpipe songs are a rarity in modern times, but, there are quite a few classics that have survived the trials of time and are still played around the world. Here we are going to take a look at some of the classic bagpipe songs which are still in circulation.

Adapted from old Scottish folk songs, this is perhaps the most recognizable bagpipe tune around the world. Very energetic and highly rhythmic, it’s often used in army settings to instill enthusiasm in the troops.

This one has a bit of history attached to it. It’s a brilliant quickstep march written for the 79th regiment due to leave Gibraltar for Canada. As the troops neared their destination, visibility was lowered due to dense fog. So to avoid a collision, the captain ordered the ship’s pipers to play the song as a warning to other vessels.

Yet another popular Scottish classic, this is often used as a rowing song or a lullaby. It tells the story of the failed attempt by Bonnie Prince Charlie to capture the British throne on behalf of the house of Stuart.

Bagpipes have come to be associated with Scottish culture. And even though they have been in use across multiple cultures and continents, they’ll forever be identified as an essential Scottish instrument.

But the fact remains that whatever be its geographical connotations, this unique instrument will continue to fascinate music aficionados across the world and generations. Its haunting melody, iconic quality, and most of all, the rather regal appearance is bound to attract anyone who comes across it.

And we are sure that now that you know all about how do bagpipes work, you’ll be all the more interested in learning it.